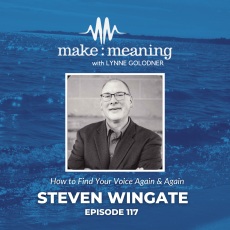 Steven Wingate writes to learn foundational truths such as: Who are we? And, why do we behave the way we do? A resident of South Dakota, Steven sets his novels in the center of America, known as the heartland, flyover country or a big open expanse of unbridled wilderness. He writes about this place that he calls home to showcase its beauty and its people. Two of his books, The Leave Takers and Of Fathers and Fire have found acclaim in the Nebraska Flyover Fiction series. In the latest episode of the Make Meaning Podcast, Steven speaks with host Lynne […]