Katie Yamasaki is devoted to using art as a platform for dialogue building and storytelling.

When Lynne Golodner interviewed Katie on Episode 103 of the Make Meaning Podcast, the muralist and children’s book artist opened up about using her artwork to provide people — particularly vulnerable women — a platform.

Yamasaki has painted more than 80 walls around the world, many in partnership with community organizations and the people they serve.

In honor of Make Meaning’s celebration of strong women during Women’s History Month, we are focusing on work Katie has done to address deeply personal women’s issues — 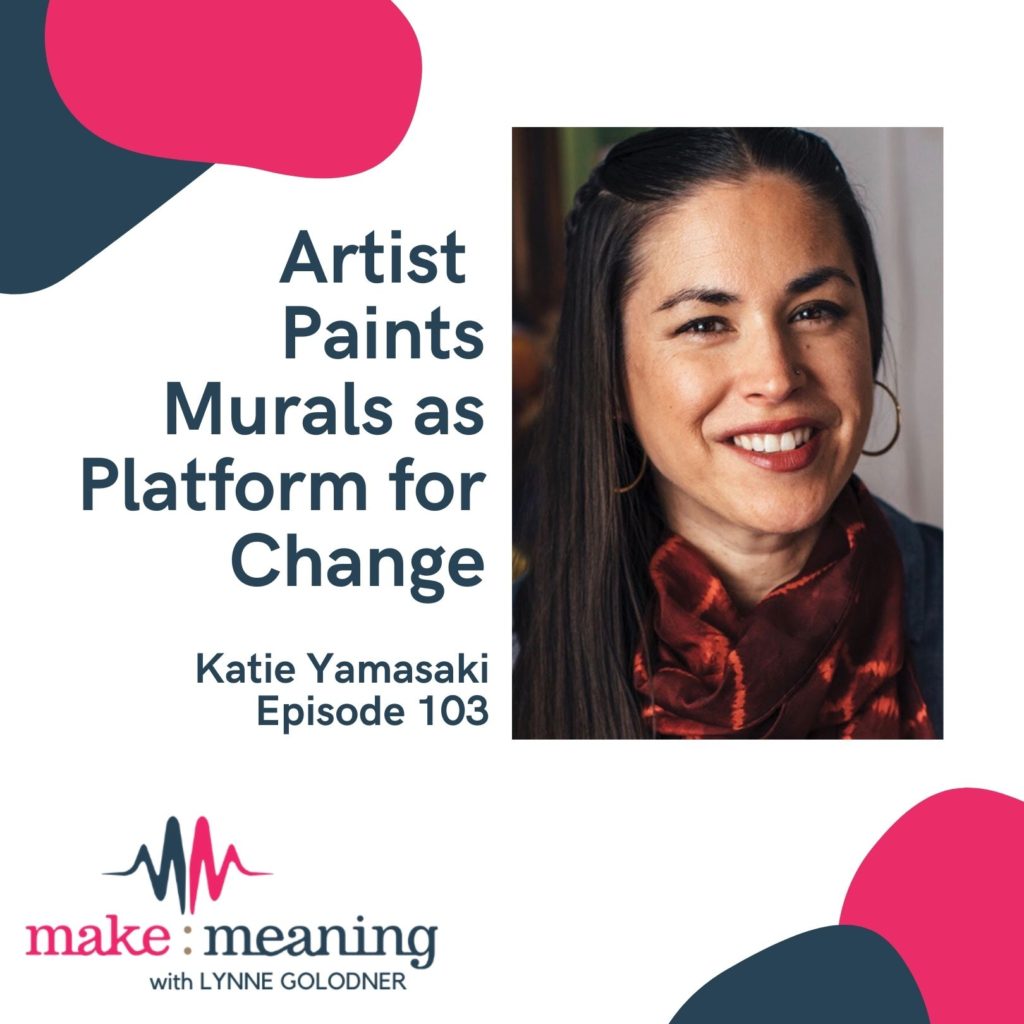 the damaging effects of consumer culture on teens, the incarceration of mothers, and the criminalization of domestic violence and miscarriage.

Katie grew up in Metro Detroit surrounded by art. Her grandfather, Minoru Yamasaki, was chief architect of the World Trade Center in New York City, her uncle a Pulitzer Prize-winning documentary photographer.

Her grandmother was a pianist. Her mother was an elementary school teacher with family craft projects forever in the works.

Katie’s parents designated a room where she could literally draw on the walls, and took her to see the famous Detroit Industry Murals by Diego Rivera at the Detroit Institute of Arts.

“I’ve never had more meaningful, creative partnerships than when I’ve been working inside a prison or detention center.”

Katie has created several murals with Voices Her’d, a program that gives young women a platform to tell their stories and advocate through art. Participants examine issues facing women and girls of color and choose a topic for a large-scale summer mural, such as “Woman Rise,” a piece about overcoming struggle at the BRC Homeless Shelter in Brooklyn.

Katie learned a valuable lesson about focusing on the higher purpose of her work while painting  another Brooklyn mural called “Truth Be Told.”

Working with a group of young women, she explored the topic of consumerism, how goods are made by women who are often exploited, and how young girls are targets of the advertising industry’s agenda to sell the importance of things over people.

At the mural’s dedication, when the scaffolding came down and the piece appeared in its entirety, Katie was not happy with it.

She tells Lynne on the Make Meaning Podcast that she complained to her father that she should have added more detail, should have done things differently.

“He turned to me and said ‘You know this is not about you, right?'” Katie recalled. “That was liberating.”

The lesson hit home when the teenagers who helped on the project got up to speak.

“They were weeping about how meaningful it was for them to have this space to be seen and have their voices heard,” Katie says. “I realized it wasn’t about me. It was about them.”

As Katie’s career grew, she began working with women in prisons. Speaking with Lynne, Katie recounted a mural she did with mothers incarcerated at Rikers Island.

Katie recently received an email from a woman who had participated in the 2013 project.

“Now she’s out and reunited with her daughters and said that project had been a really bright light in the darkest moment of her life,” Katie says.

But with enlightenment can come pain, too. Pregnant with her first child, Katie traveled to El Salvador to paint a mural for Amnesty International.

She met a woman incarcerated for infanticide after her child was stillborn. In a “wildly painful” coincidence, Katie lost her own child months later, an experience she shares openly in hopes of helping others.

“The idea then that you could be punished for that to this day can make me weep,” she says, growing emotional on the podcast.

Katie’s mural projects advocate to end the criminalization of victims of miscarriage and domestic violence as well as the mass incarceration of women in poverty. She looks forward to exploring its impact on families in an upcoming project with the Women and Justice Project.

“I’ve never had more meaningful, creative partnerships than when I’ve been working inside a prison or detention center,” she says.

What is Special About a Mural? 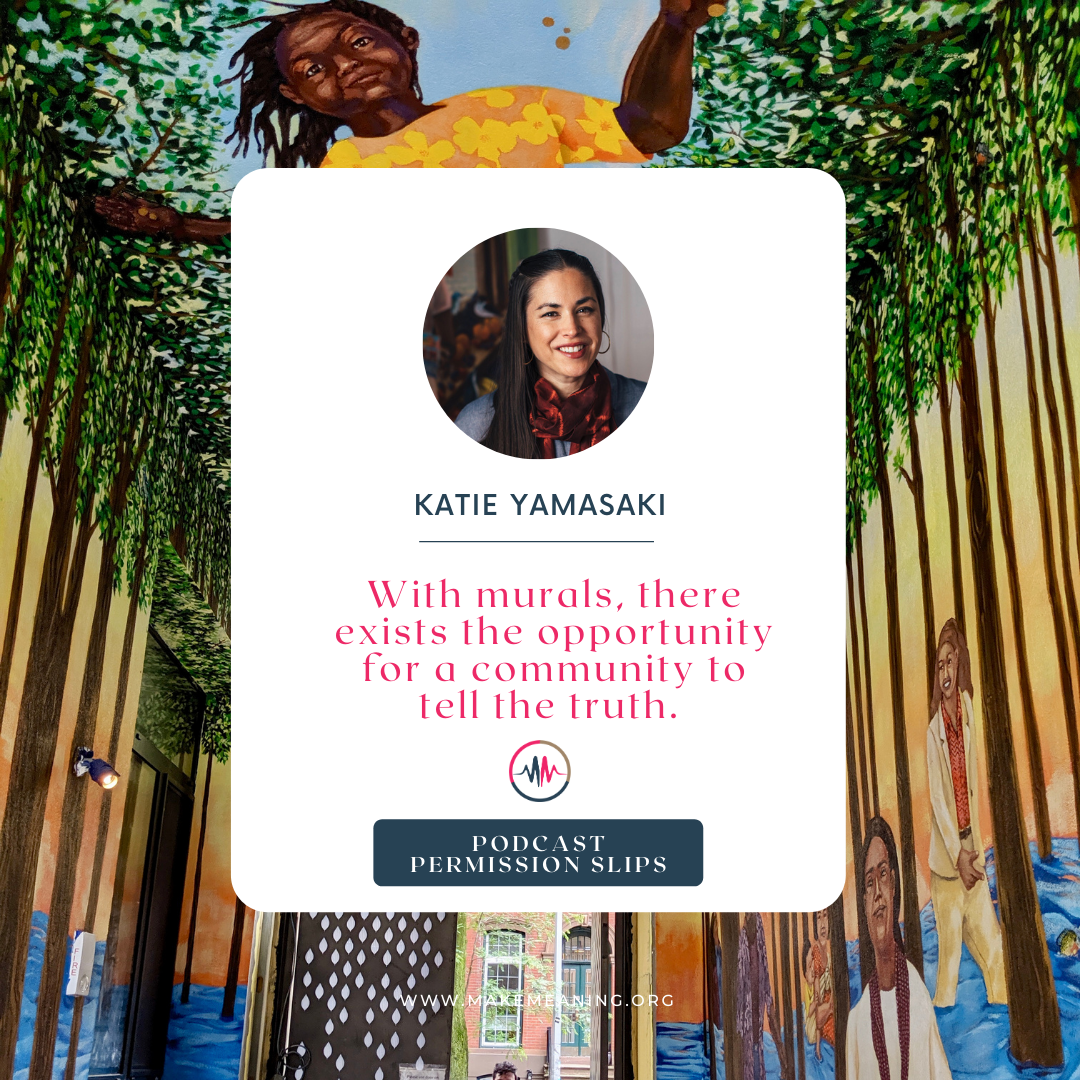 Katie says murals are an effective means for starting dialogue about issues facing women, people of color, and marginalized populations. The ideas and inspiration for her murals come from the community itself.

While she paints, people stop on the sidewalk to tell their stories, or send love as they drive by. Once a piece is done, it draws people’s eyes from their screens, making them pause and think.

Katie Yamasaki’s medium is murals, but there are countless mediums for finding meaning in work and purpose in life.

Episode 13: Teen Voices with the One Earth Writing Ambassadors

Episode 31: Art from the Heart with Jacqueline Drake

Episode 73: Jim Reese: Why Teaching Writing In Prisons Helps Everyone